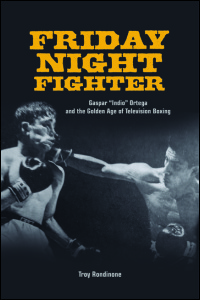 Troy Rondinone’s book is a biography of Gaspar Ortega, a Mexican-born boxer whose career spanned the years from 1953 through 1965. Ortega won 131 of 176 bouts. Ortega a tall, long armed welterweight had Indian blood on his mother’s side, and was marketed as a Mexican Indian battler, sombrero and all. He was also a boxer-puncher with a busy crowd-pleasing style that made him a television staple.

Ortega was a very active fighter. As his career was winding down, Ortega fought no fewer than 10 times in Mexico in May of 1964 alone. Ortega never held a championship, but did fight seven titleholders in his career, including a loss to welterweight champion Emile Griffith in a title contest. According to Rondinone, Ortega ranks only to welterweight champion Dick Tiger in the number of times he would appear in nationally televised contests.Ortega’s opponents read like a who’s who of boxing during the period: Don Jordan, Denny Moyer, Kid Gavilan, Ralph Dupas, Tony DeMarco, Benny Paret, Florentino Fernandez, Charley Scott, Carmine Basilio, Nino Benvenutti, and Emile Griffith.

Rondinone’s  240-page book is divided into 12 chapters, contains 14 illustrations,  and 23 pages of bibliography. Rondinone gives an important account of a unique period in sports and television history.  The Gillette Safety Razor Company sponsored television boxing. Its genius was in blending boxing, which photographed well on black and white television, with the company’s advertising campaign. In many ways, Gillette presaged the current trend in which American businesses sponsor sporting events, name venues, and link products with athletics.

By 1955 not only was there the usual weekly ritual of Friday night fisticuffs, but there were as many as four boxing shows per week with an estimated audience of fifty million viewers.  As professional boxing lived by television, so too it would die by television–a victim of overexposure, the rise of televised professional football, and the superior camera work of televised baseball. A clearer look at boxing’s brutality and exposure of widespread corruption didn’t help either.

Nonetheless, Rondinone contends that the Gillette Cavalcade of Sports, which produced the Friday Night Fights, provided a unique bonding experience for “Greatest Generation” fathers and their Baby Boomer sons. The turbulent Sixties lay ahead, but those fathers and sons were united in the experience of viewing boxing together–something they were able to do every Friday night. Theirs was a closeness that Boomers found it hard to replicate with their own sons. As time passed, parents shook their heads and wondered what happened to the closeness and simplicity of the fifties. Children came to see their fathers as old-fashioned. TV boxing, once an  agent of bonding and manhood education, is increasingly seen not as entertainment, but as evidence of anachronistic barbarism…. The heroes of Friday nights tumble into oblivion and poverty.  But, as Rondinone argues, in that one historic moment in 1955, all was well.  The boxers were on top, and the generations were at peace, counting the blows and cheering their man.

It was indeed a simpler time in the sport of boxing. There was neither the proliferation of weight classes for competitors, nor the plethora of sanctioning and governing organizations that produce multiple champions such that today’s ardent sports fans may not be able to name the heavyweight champion–something they assuredly could do in the time of Rocky Marciano, and even as late as Muhammad Ali and Larry Holmes. Nor do modern audiences recognize that television boxing provided a considerable step up from the fight clubs that still existed in major cities. TV paid $4000 per fight, with major bout paying as much as $15,000.  $4000 was more than the median salary of the average American white male in 1955, and represented an enormous payday for people of color who boxed. In 1955, a boxer on television was surely a path of upward mobility, an under-examined factor in the narrative of civil rights.

Rodinone’s book is clearly a book written by a fight fan, but he’s also aware of boxing’s greater social implications. He discusses, for example, the accurate and troubling influence of Fidel Castro on the flow of Cuban fighters into the United States. He similarly details a famous interview between telejournalist Mike Wallace and rugged champion Carmen Basilio on the brutality of the sport.  Rondinone also relates the roll of the International Boxing Club (IBC) under James Norris and Arthur Wirtz.  At one point the IBC controlled 36 of 44 championship fights and the fight cards at virtually all of the major venues covered by television. Rondinone also highlights the role in boxing of murderous gangster Frankie Carbo.  One of the more accurate and troubling accounts is Rondinone’s detailing of the first televised death that many sports fans ever saw: the death of champion Benny “Kid” Paret at the hands of Emile Griffith in the third of their epic matches.

In July of 1960, boxing’s contract with Gillette expired. Young television producers such as Roone Arledge proposed new weekly features like the Wide World of Sport in which boxing would no longer be a staple of Friday nights.  The last of the Friday Night Fights was September 11, 1964, when Nigerian middleweight Dick Tiger defeated Don Fullmer.

Rondinone’s book is a fun and easy read.  The story of Gaspar Ortega is that of a decent man who was a good but not great fighter. The book gives a good view of a bygone athletic era and what it signaled for the future. Those of us who sat with our fathers on Friday nights in the flickering light of black and white television will be moved by a sense of nostalgia. This a fine volume for those interested in boxing, in sports history and in cultural studies.