Have you ever seen Chuck Shepherd’s quirky “New of the Weird” columns? If so, you can imagine the content of Strange History. In editor 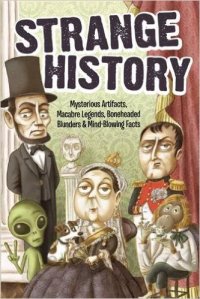 Jay Newman’s words, it’s a “smorgasbord of oddities: kings, queens, commoners, criminals, gladiators, aliens, ghosts, monsters….” You can add to that list: anecdotes, bloopers, religious origin stories, fads, riddles, and descriptions of made-up languages. Newman marshals a bevy of writers collectively known as the Bathroom Readers’ Institute. Give credit for truth in advertising; this is indeed the sort of book one might find residing in the loo nestled amidst the extra TP–a collection of breezy selections meant to be read in short, non-taxing snippets. So is there any reason to pay attention to it? Perhaps.

Like all such projects, this one is less than the sum of its parts, but the bits and pieces are individually delightful. When I was a high school teacher, I used to mine books like this for bizarre little curiosities to spring upon students, give their minds a break, and enhance my reputation for being unpredictable. The downside is that these were often the things students remembered long after they brain-dumped the important stuff. Well, at least I taught them something!

There is no rhyme or reason to the structure of Strange History and that’s part of its charm. Did you know that Mao Zedong was a librarian before he was a revolutionary, or that Idi Amin cooked for the British army before he terrorized Uganda? You can learn this from Strange History, as well as the first jobs of other famous and infamous people. The book makes no pretense of being anything other than random facts and factoids, so I made my way through this book with an eye toward categorizing detail into categories of potentially useful versus mere trivia.

For example, a sociology or popular culture instructor might find it useful to note that elders have been complaining about youth since at least 427 B.C., or that fads have always been edgy. How about crotchless tunics in medieval England, phrenology, Gerber’s attempt to sell baby food for adults, 16th century tooth dyeing, or hiring professional “hermits” to reside upon one’s estate? Students might find it reassuring to consider that the present has no monopoly over bad decision-making. Did you know that the first person to add sugar to chewing gum (1869) was a dentist? Or, more poignantly, that Adolph Hitler told the first Polish jokes? There are loads of intriguing things for computer scientists discussing computers before computing, including a mechanical wooden robot that dates to fourth century B.C. Greece. Theater and literature lessons can be spiced with anecdotes such as a long list of the misfortunes that befell those directing or acting in Macbeth, a list of one-legged actors, the possible origins of werewolf tales, or the inspiration for Mary Shelley’s Frankenstein. (Either the 17th century German alchemist Jonathan Dippel, or the 18th century Italian naturalist Spallanzani are good suspects for the latter.) The book also contains tons of origin theories, including theories about unicorns, the evolution of King Arthur tales, how zoos emerged from the private aristocratic menageries, and how Druids gave us the phrase “tying the knot” for newlyweds.

On the other hand, when would we ever need a recipe for making shrunken heads? Why should we care that TripAdvisor.com travelers consider Brussels the world’s most boring city? (Did any of them drink the beer there?) What can we learn from Joey Mellen, who drilled a hole in his own head in an attempt to achieve a perpetual high, other than the fact that he was an idiot? Do we need a list of lame insults gleaned from the Internet?

In short, Strange History is a book containing gems and garbage. Maybe the bathroom is where it ought to reside, but I suspect teachers, barroom orators, and trivia aficionados will find some useful things. A personal favorite came from a list of alleged presidential deathbed utterances. James Buchanan supposedly proclaimed, “History will vindicate my memory.” When you consider that many scholars consider Buchanan the worst president in U. S. history, you could use that remark to teach the concept of hubris.