This sixth interview is with K. A. Laity, Associate Professor of English at the College of Saint Rose.  Her article is titled: “‘Femme Non-Fatale: Female Cooperation in Elisabeth Sanxay Holding’s The Blank Wall’”.

Back in grad school at UConn, I was studying medieval literature and culture. Heavy stuff, lots of obscure languages and centuries of critical scholarship to read. I was around a bunch of folks who were studying comics and they went to PCA and had such fun they convinced me to come the next year. I have presented on comics, film, horror, crime and even revived the medieval popular culture area. It’s great.

For a while I have been trying to get more people to pay attention to the ‘godmothers’ of noir, Elisabeth Sanxay Holding and Dorothy B. Hughes — huge influences on the genre who tend to get overlooked far too often. It’s fascinating how their works get adapted — Holding’s two different film versions both have trouble engaging with the nuance of the book. While ‘domestic noir’ has become a sort of sub-genre, the films don’t quite deal with the darkness of noir in the realm of the suburbs, but the ways they grapple with it show interesting undercurrents of their times (1949, 2001).

Not nearly enough work has been done on Holding (and for that matter, Hughes) though her contemporary peers recognized her power. Raymond Chandler wrote of Holding, “For my money, she’s the top suspense writer of them all.” Her innovative use of noir tropes remains audacious. My article is about the nuance she brings to the rather tired trope of the ‘femme fatale’ to highlight how the male characters make her an instrument of death (in one case due to his feelings of guilt), while the women cooperate to survive.

With so much cutting of budgets, local conferences have a definite monetary appeal. I love the national conference because I’ve been attending it for over two decades, but the reality is it’s much easier to travel around the northeast. The quality of the NEPCA has steadily grown over the years. 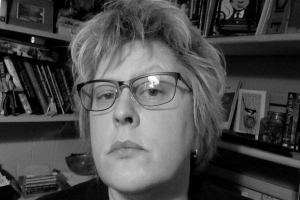 I gave a related paper at PCA national, focused more on the later film and the changes it made to the novel. I hope to combine the two papers into a longer essay that takes a more comprehensive look at the power of the novel. I am writing and writing about crime novels more these days because academia needs people who can cover more than one topic. As our department gets stripped back to a skeletal staff, we all have to cover more areas.

What current projects or research are you pursuing?

In addition to work on Hughes and Holding, my trimuleriate of Hs includes Patricia Highsmith, too. I’m giving a paper this summer on the adaptations of Ripley’s Game and how they offer an interesting gloss on the novel. In the past I’ve written about other Ripley adaptations including Plein Soleil AKA Purple Noon — everyone seems to have their own idea of Tom Ripley, but they seldom seem to match up with his creator’s ideas about him.