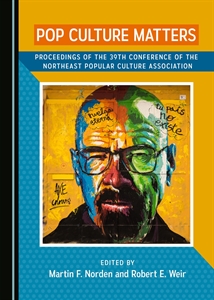 This third interview is with James Patrick Carraghan.  Theorist-by-night, James Patrick Carraghan received his MA in English from Kutztown University in 2017. He is a contributing writer for Terse Journal, and has written for LitHub, Parenthesis Journal, 5×5, and Vada Magazine (UK). He lives in Pennsylvania.  His article is titled: “Tackling the Femme: The Psycho-Biddy Genre.”

I’m interested in studying popular culture because I’m fascinated with the way mainstream pop culture interacts with, was shaped by, and is reflected through gay/queer culture. My closest friends and I formed an image of ourselves as “culture queens”—the ones who knew everything about classic movies and musicals and books, throwing out cultural references left, right, and center. We would talk about how all of these things related to each other and influenced new makers of culture. I also love seeing how a pop figure can take on queer significance over time: the way that Karen Carpenter went from super-mainstream and conservative pop music to queer icon, or the evolution of Kristen Stewart from bland vampire-chaser to a sexually ambiguous art-house figure. 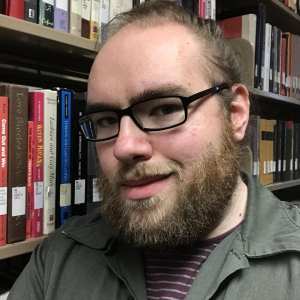 I was intrigued by the figure of Bette Davis since I was a teenager. I was specifically interested in her because of the longevity of her career and the range of the roles she played. I also loved psycho-biddy movies (a subgenre of horror films focused on older women), especially Whatever Happened to Baby Jane? I had the good fortune to see many of these films on the big screen at festivals or second-run houses, and they made deep impressions on me. I wanted to discuss the ways that three of the films Davis starred in—Baby Jane, Hush, Hush, Sweet Charlotte, and Dead Ringers—riffed off of each other and what they each had to say about portraying women on screen. I was also curious to see how these films either supported or subverted horror movie tropes.

It’s been fifty years since Baby Jane and we’re still fighting against sexist and ageist ideas about the role of women in movies. Even with Isabelle Huppert, Judi Dench, Glenn Close, Olivia Colman, Meryl Streep, et al. contributing amazing, career-defining performances in the last few years, there’s still arguments about whether or not an actress can be a commercially-viable lead in a mainstream film after middle-age. Not to mention that even films ostensibly about women are often retreading the same territory that puts primary focus on the men in their lives rather than the women themselves. Part of what I love about the psycho-biddy role is that it enables actresses enact a form of outsider or “queer” womanhood.

I had a wonderful professor at Kutztown University, Dr. Robert Kilker, who assigned us to write the first version of an abstract and conference paper with a goal of actually submitting it to a conference. (NEPCA was actually one of the conferences suggested.) While I was helping a friend recovering from surgery, I went back to the abstract one afternoon, revised it, and submitted it. To my complete shock, it was accepted. I attended the conference with my friend and colleague, Heather Flyte, and we both had a wonderful time presenting. It was a wonderful conference; I would love to present there again one day.

I’ve followed my interest in the construction of identity in film through a few other essay pieces, including one about Otto Preminger’s film Laura that was published last year at Cinepunx. I’m always interested in the myths that films create around a character and the actor who plays them. I’m interested in distinguishing between the idea of the actor formed by media and public perception, and the person who comes home at night, takes off the makeup, and has to live in that space we call “Bette Davis” or “Gene Tierney.” The line blurs between the character that an actress plays and their real life—both become part of the myth of the actress.

What current projects or research are you pursuing?

I’m currently working on projects that are a bit more aligned with poetry and fiction. All of my recent work has been focused through cultural influence on personal identity, specifically the way that we can learn how to behave, how to be stylish, how to enact “boy-ness” or “girl-ness,” through the films we see, the songs we hear, things we read, and the entertainment we’re drawn to. Even something that we don’t like can become part of the background noise of how we enact a sense of ourselves.