The Wilderness of Ruin: A Tale of Madness, Fire, and the Hunt for America’s Youngest Serial Killer. By Roseanne Montillo. New York: William Morrow, 2015. 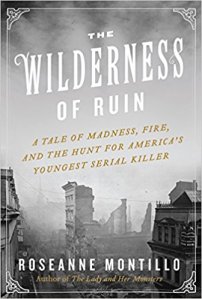 Gilded Age Boston and Chicago shared a lot in common. Both had World’s Fairs: Boston in 1883, and Chicago ten years later. Each suffered devastating fires, with Chicago being nearly destroyed in 1871, and Boston losing most of its commercial district in 1872. Both also had notorious serial killers, with Boston holding the dubious distinction of producing Jesse Pomeroy, the first juvenile serial killer to be sentenced to hang. Pomeroy’s story is the subject of Roseanne Montillo’s sometimes fascinating, sometimes frustrating The Wilderness of Ruin.

Montillo, who teaches literature at Emerson College, has an eye for a good saga, and that of Jesse Pomeroy (1859-1932) certainly qualifies. Jesse’s is a biography that would challenge the fictive powers of an imaginative crime writer. He was born into an economically marginal working-class family in Charlestown, a seedy neighborhood best known for its grimy waterfront. A childhood illness damaged Jesse’s right cornea and left him with a distinctive cloudy eye. He was taller than peers and, from an early age, demonstrated disturbing characteristics: social isolation, fascination with his father’s butcher knives, a love of violent dime novels, and acts of animal cruelty. His waterfront jaunts yielded the revelation that twelve-year-old Jesse was responsible for a serious of brutal attacks on boys as young as four. His first victim was stripped naked, tied, hoisted ahigh, and whipped; subsequent victims were cut, stabbed, pricked with pins, and brutalized­–often in their genitals. Because there were no known deaths, Jesse was sent to a reformatory where he was supposed to remain until his 18th birthday.

Pomeroy was out in 14 months, paroled to his mother’s care in South Boston, where the family had moved to escape ostracism. Jesse was released in February of 1874, and in March, nine-year-old Katie Curran went missing. In April, the body of four-year-old Horace Millen was discovered, and Curran’s body shortly thereafter–each mutilated in ways suggestive of Pomeroy’s earlier spree. Pomeroy was convicted of first-degree murder in December, and was sentenced to hang. Governor Gaston’s refusal to sign execution orders led to a year and half of legal wrangling before Jesse’s sentence was commuted to life in solitary confinement. Three months before he turned seventeen, Pomeroy was transferred from Suffolk County Jail to the state prison in Charlestown, where he spent the next forty years in a ten-by-ten-by-eight cell. During that time, he made a dozen serious escape efforts, exhausted the prison library, learned numerous languages, wrote a self-serving autobiography, and badgered a dozen governors with pardon requests. In 1917, he was allowed to intermingle with the general prison population, but showed no interest in doing so. Much to his chagrin, he was sent to the Bridgewater Hospital for the Criminally Insane in 1932, and died there in 1934. Only two murders were directly tied to Pomeroy, though rumors–sometimes from Jesse and sometimes denied by him–suggest he was responsible for as many as nine.

This is dramatic stuff that Montillo wisely opts to tell in a novelistic voice. This makes swaths of the book highly readable. Her instincts are sharpest when she connects Pomeroy to his broader social milieu, as Erik Larson did in his masterful The Devil in the White City (2003), the tale of mass murderer Dr. Henry Holmes (Herman Mudgett). Larson placed Holmes within a grand narrative stretching from Chicago’s 1871 fire through the 1893 Columbian Exposition. Montillo uses Boston’s 1872 fire as a partial explanation of how Pomeroy’s first spree took so long to solve, and she is in good form when describing the tawdry waterfronts and grimy neighborhoods of Jesse’s youth. Especially crisp is her account of Jesse taking his first and only automobile ride in 1932; she puts herself inside his eyes to “see” how Boston had changed during his 58 years of confinement.

Alas, she dowses her literary fires when she tries to connect Pomeroy to Boston glitterati such as Herman Melville and Oliver Wendell Holmes. She wants us to view Jesse’s monomania as analogous to Ahab’s and launches into discursive and unconvincing analyses of Moby Dick. She also delves deeply into Holmes’ biography, though he was peripheral to Pomeroy’s case. There are also detours into Camus, Dickens, Irving, Poe, and others attracted to the dark side of the psyche. By the time I finished, I was reminded of times in which I was dazzled by the sight of a restaurant meal, only to taste it and conclude that the chef spoiled the dish by adding too many ingredients.

I wanted The Wilderness of Ruins to be a Boston version of The Devil in the White City; instead, it is more about Montillo than her subject. Note the subtitle. The “madness” part is mostly perfunctory unresolved psychological speculation; the “fire” offers little insight into a lad whose spree began a year earlier; the “hunt” was brief; and Pomeroy isn’t “America’s youngest serial killer,” only the Bay State’s. Too many ingredients! My advice is to borrow juicy material for your lectures, but only if it makes them more savory.