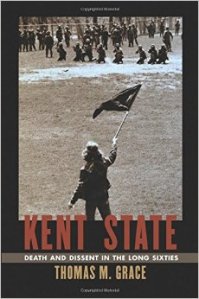 Tin soldiers and Nixon coming/We’re finally on our own/This summer I hear the drumming/Four dead in Ohio.

Those lines from Neil Young’s “Ohio” were inescapable by the summer of 1970, with Young’s pained voice and blistering guitar presaging those of punk and grunge. Anger was already in the air, but the May 4, 1970 shooting of thirteen Kent State University students brought home that rage for multitudes of Americans. By summer’s end, Kent State had become the symbol of divisiveness that roils American society to the present day. Those on the left seized upon Kent as further confirmation that the American Establishment was controlled by duplicitous liars with murderous intent—those willing to expand an immoral war (Vietnam) into neighboring Cambodia and also ready to mow down anyone, including college students, with the audacity to challenge their authority. To those on the right, Kent State was a long overdue crackdown on lawless degenerates who sought to rent the very fabric of American society.

If the two camps shared anything in common, it was their surprise that matters came to a head at Kent State. Until May 4, most Americans had no idea where Kent State was even located. Those such as this reviewer who are old enough to remember the 1970 shootings at Kent (and also Jackson State, Mississippi) recall that most coverage presented Kent State as something of a backwater—the term “small second-tier state school” was often used. Why there? Kent, the media asserted, had not been an epicenter of campus dissent like UCal Berkeley, the University of Michigan, Columbia, San Francisco State, or the University of Wisconsin.

This was because too few were paying attention. So says Thomas Grace and he would know—he was at Kent and was among the nine students wounded on May 4. Kent, Ohio was a small city of just over 28,000 in 1970, but it was no backwater—it was/is an outlying section of Akron and part of the Greater Cleveland metropolitan region. In one of the book’s many remarkable features, Grace has meticulously researched the backgrounds of Kent students and can definitively say that though the university had grown like Topsy—from 6,000 students in 1955 to over 21,000 at the time of the shootings—its undergraduates were not just the sons and daughters of farmers; they were also the children of blue-collar workers. Many were first-generation college attendees and some were students of color whose entrance into higher education was uneasy.

Grace deftly employs the concept of the Long Sixties to prove that the events of 1970 were neither unique nor unpredictable. Ohio—as election observers know—has long been a divided state. In 1970, conservative Republican James Rhodes was governor, but Kent’s students hailed mostly from parts of the state where labor unions had fought and won hard battles. In 1966, the largely black Hough section of Cleveland exploded into six days of rioting that destroyed millions of dollars worth of property. Four (ahem!) people died and fifty were wounded. Those who landed on the Kent campus during the 1960s were neither naïve nor quiescent. The campus saw its first major protest in 1961 and by the mid-Sixties Kent was a spider web of Old and New Left organizations: socialists, Trotskyites, civil rights advocates, SDS members, black nationalists, antiwar activists…. Moreover, ten percent of Kent students were Vietnam veterans, many of whom were outraged by Nixon’s decision to invade Cambodia. Though several of those shot at Kent were not actively protesting, most of those chanting for the National Guard’s exit from their campus knew why they were protesting and were experienced at doing so. As Grace says of himself, “I was not a victim; I was a casualty.”

Grace’s book is so filled with individual stories that one is sometimes lost in the welter of unfamiliar names, but some clear villains emerge: Governor Rhodes, parts of the KSU administration, Ohioans applauding the suppression of civil liberties, the Ohio National Guard, and court systems that literally allowed the Guard to get away with murder. But Grace leaves us with some of his namesake vibes. In a final sweep, his appendix traces the post-May 4 lives of protestors. They did not slink away, as those hoping to teach them a lesson had hoped. Most were activists before 1970 and remained so afterward. Grace, a Syracuse native, returned to campus after a long rehab to show he belonged. Until retirement, he was a Buffalo area social worker, union organizer, and part of the May 4 Memorial task force. Then he got a Ph.D. and is now a history instructor at Erie Community College. He insists there is nothing special about his story—his prerogative, but his book is extraordinary.

What if you knew her/And found her dead on the ground/How could you run when you know?

Do you have a CFP to share for your organization? We're happy to share it on our social media platforms and even here on our blog. Fill out this form!
Join 2,305 other followers