This review appeared in the Cultured Classrooms section of NEPCA’s fall newsletter. It seems appropriate to repost it as a review on Inauguration Day.

Putting Class Back Into the Classroom 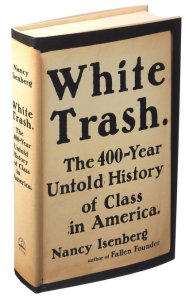 I’m guilty of being one of those scholars who too glibly use the words “important book” in reviews and academic discussions. We often mean, simply, a work that advances some argument within our narrow specialty—not a book we could actually teach, or one that undergraduates would find provocative. Every now and then, however, a book appears that truly is “important.” Such a work is White Trash: The 400-Year Untold History of Class in America (New York: Viking, 2016). Its author, Louisiana State University history professor Nancy Isenberg, hit the market at a propitious time: during the Donald Trump political tsunami. Whether or not Trump wins in November, his campaign has energized many of the people about whom Isenberg writes: the white working class, especially those who live on the economic margins, often–but not exclusively–in the proverbial hinterlands. Educated Americans and those with financial resources have, historically, evolved a host of terms to dismiss these folks: waste people, sturdy beggars, clay-eaters, crackers, hillbillies, rednecks, trailer trash, lubbers, tar-heels, underclass, white trash….Isn’t it odd that few of these terms are ever discussed during campus cultural-sensitivity sessions?

Isenberg asserts that we ignore this group at our own peril. By most accounts, white wage-earning Americans make up 30% of the electorate. This means they’re no longer a majority, but given the stark divisions within American society, that 30% has the potential to alter elections. I think this book needs to be taught, so allow me to highlight a few of Isenberg’s assertions and to add questions I think could spark lively debate.

* First and foremost, Isenberg asserts that the working poor are not a recent phenomenon; they are sewn into the very fabric of white North American society. Isenberg catalogues this pattern from British colonization to the present. It’s not really the “untold history” she bills it, but few have marshaled as much evidence for the claim that outcast underclasses are not merely unfortunate; they are the deliberate creation of economic elites that exploit them for their own gain. Moreover, white trash has been conditioned to see itself as such; Isenberg’s is a pathology of powerlessness.

* This will ruffle feathers, but Isenberg argues that those who discuss race or gender without referencing social class are futilely talking to themselves. This is because elites have successfully inserted the mudsill theory into the national dialogue. (The mudsill theory holds that society, like a house foundation, sits upon a bottom layer of social “mud” on which all power relations are constructed.) In essence, the white working class–often masculine in character–compensates for its lack of power by defining others as inferior: non-whites, recent immigrants, and women. This has also been done in ways familiar to pop-culture scholars: when crude power fails, use manufactured flattery of the sort we now see in the “new rage of slumming” (291), or what I’d dub “redneck glorification,” as seen in Elvis, Dolly Parton, Bill Clinton’s presidency, and TV shows such as “The Beverly Hillbillies,” “Honey Boo Boo,” “Redneck Island,” and “Duck Dynasty.”

*This will also rankle: Isenberg sees class as the essential analytical category. She has little patience with using social class as a sort of “drive-by” tool in the way we view history or contemporary sociology.

*Isenberg has even less patience with those who equate white trash traits with the Scots-Irish. Such ethnic identification isolates, stigmatizes, and ignores both the pervasiveness of the white underclass and the power relations that created it. She dismisses–and I agree–Grady McWhiney’s Cracker Culture. I’d toss J. D. Vance’s recent Hillbilly Culture (Harper, 2016) into the not-to-be-taken-seriously pile.

*Another target of Isenberg’s analytical sword: conservatives who dismiss white poverty as proof of degeneracy, lack of initiative, or cultural/regional norms. She bristles with indignation when someone like Mitt Romney insists upon the personhood of corporations, given the systematic manner in which the 1% he represents has denied the humanity of poor whites. If you think she exaggerates, see her chapter on eugenics.

* She reminds us that the Civil War was as much a class war as one about race. Scholars know this as well, but it’s good to be reminded.

*Isenberg suggests that the cherished American ideals of equal opportunity, equality under the law, and freedom are largely ahistorical descriptions of the true American past.

So how can we use this book in the classroom? Here are ten discussion questions that occurred to me. Other readers will easily come up with others.