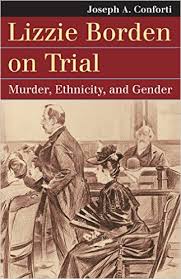 Joseph A. Conforti’s Lizzie Borden on Trial examines the infamous case of Lizzie Borden, who was accused of murdering her stepmother and father with an axe in 1892. Conforti offers a new perspective on the case by centering his analysis on the socio-economic forces that allowed a middle- class, white, Protestant woman to be acquitted of these crimes. The author meticulously examines the neighborhoods, patterns of immigration, social dynamics, gender roles and ethnic identities of the changing landscape of Fall River, Massachusetts, a prosperous textile town. Conforti argues that Borden was able to manipulate the media and her own class and family connections by playing into the people’s anxiety about growing number of immigrants (Irish, Italian, Portuguese and French Canadian) arriving in town, long-standing religious prejudice, and her family’s own long established social position. Her deft performance while on trial also ensured her acquittal. Conforti pieces together all of the complex elements of New England society and Victorian sensibility and locates the trial within this multi-faceted context.

Conforti builds his argument slowly and carefully by looking closely at the larger society and social order of Fall River before focusing on the events of the murder and trial itself. He contextualizes the crime and trial beautifully and offers a complete description of Massachusetts during the Victorian era. The book contains excellent details and delves into the role of the Borden family as well as Lizzie’s individual experiences in shaping this mill town. He devotes his longest chapter to a detailed examination of the Borden family and those associated with the household, unpacking the various influences in Lizzie’s life that could have informed her (alleged) actions. Conforti, who himself grew up in Fall River, had heard the story of the Borden family all his life and of course, has an intimate understanding of the town and its society.

The book draws from a number of interesting and excellent sources including contemporary newspapers all across New England and New York in the 1890s and also the trial records. He reproduces several passages from the trial transcripts. Conforti’s book is very well organized moving both chronologically and thematically across the events of the trial and his social analysis. The book includes a useful chronology. In his bibliographical essay in the back of the monograph, Conforti creates a historiographical lineage for his own work and comments on the development and current state of the field, which has become increasingly interested in questions of ethnicity and gender. Conforti’s work draws from several prominent scholars working on this topic and adds his own synthesizing observations.

This book would work very well in a methods class, as undergraduates would gain much from examining the way that historians interpret and approach primary and secondary sources. It would also fit nicely into a survey course on immigration in the United States or on the Progressive Era. Conforti’s book is very accessible and would be engaging for undergraduates in a variety of classroom settings.