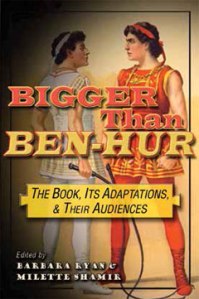 Bigger Than Ben-Hur: The Book, Its Adaptations, and Their Audiences. Edited by Barbara Ryan and Milette Shamir. New York: Syracuse University Press, 2016. .

For many fans, the best-known film version of Ben-Hur is the 1959 film version, with its memorable chariot race between Charlton Heston as Ben-Hur and Stephen Boyd as Messala. For fans of William Wyler’s epic–the winner of eleven Oscars, including Best Picture–this edited volume will be a revelation. Editors Barbara Ryan, associate professor in the University Scholars Programme at the National University of Singapore and Milette Shamir, senior lecturer in English and American studies at Tel Aviv University, have gathered eleven essays that reflect the subtitle of the book. These approach Ben-Hur from multiple perspectives (religious, secular, literary, theatrical, and cinematic) in an attempt to allow the reader to understand not just one story in varied formats, but also what they term the “Ben-Hur tradition.”

Drawing from a wide range of disciplines, contributions include the rise of the Protestant novel in the United States (Shamir); the New Woman in early Hollywood (Thomas Slater); and a “wish list” for future adaptations (David Mayer). Other topics include analyses of Rome itself (Eran Shalev); a look at the Christmas story through Ben-Hur, Uncle Midas, and the Sunday-School Movement (J. A. Gatrall); Zionist implications in Ben-Hur (Hilton Obenzinger); and takes on Jesus and Judas (Richard Walsh). Race (Ryan) and sexuality also come under scrutiny, the latter by Ina Rae Hark, whose “The Erotics of the Galley Slave: Male Desire and Christian Sacrifice in the 1959 Film Version of Ben-Hur” is one of the most interesting chapters in the book, exploring the implied homosexuality between Ben-Hur and Messala in Wyler’s film. The collection rounds off with Jon Solomon’s useful “Timeline of Ben-Hur Companies, Brands, and Products,” and there are also an excellent section of notes at the back of the book and a ‘Selected Bibliography of Ben-Hur Scholarship’ (pp. 249-253).

Together, these essays explore how this remarkably fluid story of faith, love, and revenge has remained relevant to audiences across the globe for over 130 years. After an introduction on the Ben-Hur tradition by co-editors Ryan and Shamir, the eleven essays that follow are well written and illuminating. Readers of the original novel and subsequent filmgoers often consider “Ben-Hur” to be a story from the Bible, which it is not. Although it certainly can be considered an exciting adventure story, author Lew Wallace’s original intent was to emphasize honor, love, and redemption. Director William Wyler’s 1959 film was the third adaptation of Wallace’s tale, and it’s the only one that is really remembered today. There were, however, two earlier versions, one in 1907 and a second in 1925, as well as a 2003 animated version, with the voice of Charlton Heston, the star of the 1959 film, as Ben-Hur.

First published in 1880, Wallace’s Ben-Hur: A Tale of the Christ became the biggest selling novel of the 19th century. It spawned an 1899 stage adaptation and the aforementioned film adaptations, yet oddly Bigger than Ben-Hur represents the first and only collection of essays on this cultural icon. This book has something for everyone, from the pop culture enthusiast to the academic scholar, and it will be an especially welcome addition to film and religion studies, to the study of American popular culture, and to scholars interested in the various genres of media.

There are eight illustrations, sparsely distributed through book. This is a minor disappointment; a subject like would seem to warrant more illustrations to support discussions of the theater and film productions that Ben-Hur has generated, especially the 1959 Oscar-winning film that is still easily available on DVD and Netflix.