9/11 and the Visual Culture of Disaster, by Thomas Stubblefield, Bloomington, IN: Indiana University Press, 2015. 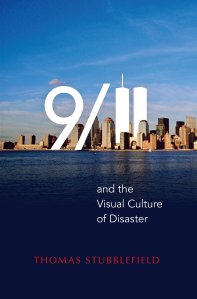 In his first book, Thomas Stubblefield, an art historian at the University of Massachusetts, Dartmouth, explores the importance of visual representations of 9/11 by focusing on what we are able to see in photographs, films, monuments, and graphic novels. More significant is how Stubblefield opens the eyes of his readers to the importance of the invisible lurking within various media forms presenting the visual culture of disaster. Stubblefield explains that he “centers on the paradox of the visual culture of 9/11, which both foregrounds the image and the visual experience in general and at the same time steeps the events of that day in absence, erasure, and invisibility” (38).

Throughout the book, Stubblefield provides thorough analyses of the visible and hidden representations of disaster by taking the reader on a journey through various mediums. He begins his analysis by reviewing 9/11 as seen through photography. Many individuals forget that 2001 was a transitional year in photography—one in which digital photography was beginning to gain popularity, but many people still used film cameras to capture the world around them. This border of the immediate and the delayed image created a unique experience in the visual representations we have of the events of 9/11. We have images that are immediate and camcorder videos that captured the events of the day punctuated by commentary from regular citizens behind the lens. However, we also have delayed images that did not follow the events succinctly, as well as material from those who unknowingly captured some of the events of the day. Stubblefield writes of still cameras and 9/11, “[T]he wound simply breathes smoke through regular intervals of the camera, which remains unfazed by what it records” (119).

Moving from photography to film, Stubblefield presents a thorough analysis of the image of the now iconic “Falling Man” by Richard Drew. He muses upon the historical context of images of the fall and how these can be interpreted in photography as well as in the moving image. Stubblefield’s discussion of empty cities in photography and film is remarkable in helping the reader understand how artists create an agency that is felt by the viewer through the absence of images. He explains, “[A]gency is necessarily transferred to the viewer, who is asked to intervene, in essence, repopulate the city” (92). Further, “the viewer’s exclusion from the image comes to turn upon itself, producing subjectivity by way of a traumatic encounter with the otherness of the apparatus” (118).

Stubblefield concludes his book with discussions of monuments and graphic novels and how these relate to the visual culture of disaster. He provides a unique critical view of Art Spiegelman’s In the Shadow of No Towers. Most commentators have utilized trauma studies when viewing Spiegelman’s work, but Stubblefield allows us to engage the graphic novel from a visual perspective. Stubblefield expertly deals with Michael Arad’s memorial Reflecting Absence at the site of the World Trade Center. Waiting until the end of the text to deal with the memorial was appropriate, as Stubblefield moved the reader to a full understanding of the pervasiveness of the absence of images before discussing the memorial created to reflect the absence of the Twin Towers.

Stubblefield’s book covers so much ground that a reader might have felt lost and disconnected were it not for his skillful and succinct writing. Stubblefield expertly builds his argument for the analysis of visual culture of disaster including the necessity of looking at what is not present in the various images we have consumed since 9/11. Older ways of viewing are pervasively connected to emergent ways of perceiving the present—a duality we must grasp in order to understand fully 9/11 the connections between 9/11, images, and subjective reactions to disaster. Stubblefield’s arguments are meticulously grounded in theory and his extensive discussions of prior research into the visual culture of disaster are helpful in contemplating new paradigms for disaster research.

This is a must-read for those interested in visual imagery; indeed, parts of 9/11 and the Visual Culture of Disaster expand our thinking in promising ways. Scholars in the area of visual culture and visual rhetoric will find Stubblefield’s book particularly useful in broadening the discussion of what is not present in media images and what they tell us about what is present. Advanced undergraduate or graduate students would benefit from reading Stubblefield’s book as he expertly utilizes theory and provides an exemplary template for how to conduct an insightful analysis. The use of this book in advanced undergraduate or graduate courses would help facilitate dynamic classroom discussions.