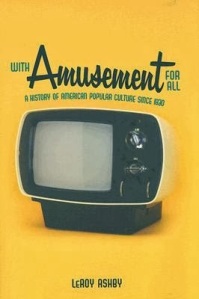 Balancing theory, historical context, and theory makes finding the right text for a popular culture course a supreme challenge. Some books offer all theory; others give the straight history (whatever that means). In various renderings of the popular course that I have taught over the last five years, I have tried no less than five different texts with various successes (and failures). This review looks at several different texts that may be useful for teaching a popular culture course.

There are a few things to note about my course that give context to the choices and critiques that follow. The course was originally designed as “Popular Culture and Media,” essentially blending popular culture and media studies. The content proved too much and the course was changed to “Popular Culture in the U.S.” This switch deemphasized media studies (though it still discusses media) and focused particularly on the United States. The course is structured to provide history, theory, and analysis of popular culture through different readings, videos, and activities while moving chronologically forward into the present.  My goal with the course is for students to come through it with a skill set that allows them to tinker under the hood of any element of popular culture they may encounter with a critical evaluative approach, but a nonjudgmental one. I developed and launched the course at North Shore Community College in Spring 2009 and taught it face-to-face until 2011. In 2012, I redeveloped it as an online course.

Since teaching online, I have been consistently using Jim Cullen’s Popular Culture in American History, which is an overall solid text. Each chapter is broken up into five sections:  timeline, a short contextual introduction, an academic article (usually a book chapter), a primary source, and a set of critical questions. Each chapter moves forward chronologically so that the book is collection of case studies from past to present. In this sense, it’s not a coherent history for students in that there are lots of gaps. Rather, students gain access to different periods of popular culture and exposure to how it can be studied and discussed.

In the first edition, Cullen included chapters on chapbooks, dancehalls, and spatial dynamics of rap videos. In 2013, the book released its second edition, which is, alas, inferior to the first. Though two new chapters proved useful and insightful (the chapbook chapter was replaced with a chapter on the penny press and the dancehall chapter with a chapter on movie Westerns), but the final three chapters (all new) are less useful and seem to fall far from the quality that the rest of the book maintains. These chapters include a chapter on reality television, rappers, and blogging.

These articles lack the objective approach seen in previous chapters. The article on rappers (“Just Keeping It Real” by Tricia Rose) probably does the best of the three by exploring the use of the term “just keeping it real” as a defensive term for justifying a variety of challenging views within hip-hop community, while simultaneously creating problems about perceptions of the hip-hop community. Coupled with an article that dismisses reality television as sexist (“Reality Bites” by Susan J. Douglas) and an article that disregards the potential of blogging and social media (“The Emperor’s New Modem” by Lee Siegel), the three operate as more of an elitist condemnation of popular culture than as studies of the power of popular culture and the ways in which people find meaning and identity. For instance, Siegel echoes Matthew Arnold (Culture and Anarchy) with lines like, “Some of the comments on YouTube make you weep for the future of humanity just for the spelling alone, never mind the obscenity and the naked hatred.”

Susan O’Brien and Imre Szeman’s Popular Culture: A User’s Guide, Second Edition––a third edition has just been released, but I have not yet had an opportunity to review it––is a robust book as an introductory text to popular culture. It’s a comprehensive textbook that balances history, theory, and analysis quite well. Chapters cover different facets of popular culture (history, representation, production, consumption, the body, identity, space and more). Each chapter is then broken down into subsections, images, charts, contextual asides, text excerpts, activity challenges etc. in typical textbook fashion.  The book has a very useful and comprehensive glossary that may be invaluable for students. Additionally, the first chapter, “Introducing Popular Culture” is a fantastic read for anyone trying to get a grip on popular culture. Besides providing a clear and concise overview of popular culture, the authors provide a case study of coffee and the ways in which it operates as part of popular culture. The book isn’t overwhelming, but does provide a comprehensive approach to popular culture.

Though the book is strong in these ways, it still suffers the shortcomings of being a textbook. In size and shape, it is clearly a textbook and students tend to find fault with that fact alone, especially when it applies to a course carrying the “fun” expectations of popular culture.  Textbooks, to no one’s surprise, are not sexy. Added to this is the price tag, which for the physical book comes in at two or three times the cost of any one of the other books. The e-book is cheaper than its physical counterpart, but it’s pricier than the other books herein.

Anna Tomasino’s Discovering Popular Culture offers a third and different approach than the previous two. It features a thematic chapters centered on a set of writings from different authors. Each chapter has an introductory essay by Tomasino to set up the ideas about the theme as well as to provide pre-reading questions. Each essay has a brief introduction along with a specific pre-reading question geared towards that reading, the essay, and then follow-up questions. The chapters cover a good range of popular culture including chapters on the American identity, gender, family, race, education, and consumerism.

In contrast to the previous two books, this one packs less impact. The essays are often selections from within popular culture, which can be useful, but also limiting in that they don’t always provide the tools or examples of ways of diving deeper into the nuanced elements of popular culture. For instance, the chapter on gender has good readings from popular culture­­ ––including one from Barbara Ehrenreich––­­ but never provides a strong discussion of gender that’s grounded in historical context and cultural analysis. As a course reader, it fits more as a source for a composition course that focuses or uses popular culture, and much less on a course specifically for studying popular culture.

The final text is one that I’ve not actually used yet, but having read it has me wondering if I should. Leroy Ashby’s With Amusement for All: A History of American Popular Culture since 1830 is a comprehensive text insofar as histories of popular culture go. It comes at nearly 650 pages, however, the content stops around page 517; the rest is footnotes, bibliography, and index.  More importantly, despite a long and detailed history, the prose is accessible and interesting. This happens in part because readers are never too far from some exciting event, and Ashby’s style of writing coupled often with good quotes from primary sources make for an enjoyable frolic through pop culture history.  Readers walk away with a profound sense of the different historical, cultural, and economic forces at play in what creates, maintains, and changes popular culture. A paperback edition was recently released that includes a new introduction that integrates the changes and dynamics of popular culture since the hardcover that was published in 2006. Additionally, among the books listed here, this is the only one to have been published also as an audiobook (on Audible.com), which some may also find useful to use in the classroom.

Where the book falls short is its approach. It’s historically focused, so those looking to extrapolate theory and analysis might not find it particularly useful. Like Cullen’s text, its focus is on the United States. The book can also be a bit intimidating in its size and bulk. Also, unlike the other texts mentioned here, the audience is not necessarily students, therefore some of those extras such as guiding questions and activities are missing. I am still considering it since I have created much of the other material that the book lacks and it seems to have a clearer direction than Cullen’s episodic approach. It’s cheaper than the O’Brien and Szeman text, and much more substantial than Tomasino’s. Of course, if the other books are any indication of my experience, I’m likely to use it and then find all the faults with it based upon how my students do with it.